The MM post is becoming overcrowded and so I will log the editions, printings and sendings here.

All copies to date have been printed by Lulu. They provide an excellent service.


The plan is to send copies to a variety of appropriate parties, notably the dedicatees (Mondrian experts), at least those still alive, and fellow Mondrian enthusiasts. Library copies might be demanded by the five other Legal Deposits and a couple of copies will probably be sent to the Library of Congress (that plan abandoned for copyright reasons). I also leave a copy anonymously in the bookshop of any Mondrian exhibit I visit.

[2Apr15] The next few copies will probably be sent to E.A. Carmean Jr, Marty Bax, the V&A, Lucy Howarth and perhaps Mr. Gundlach.
[13Apr15] 4of5 ready to send but no address found for Lucy Howarth.
I'll have to order another 10 copies, but will add notes on copyright first.
[14Apr15] 4 sent today and I now have Lucy's address.
[21Apr15] time to send off another two copies and then order another ten. Perhaps John Milner and Yve-Alain Bois as I have probable (institutional) addresses for these.
[11May15] I have not yet sent the Milner and Bois copies. I am rather disappointed with the lack of response from the copies sent, however, if I had to choose four recipients to receive replies from, I couldn't do better than Nancy Troy (author of my favourite book on PM), Lucy Howarth (Marlow Moss authority), Mark Caywood (the finest PM homagiste) and Yvonne Louis (a lovely person and author of a lovely book that pertains to PM).
I am currently reading through my PM emails and have learned that I sent a copy of an earlier version to Luis Diaz, Senior Lecturer in the Faculty of Arts at the University of Brighton). I am not certain which version I sent, but it was mailed in July 2014, so it was probably the 5th draft.
[22 May15] The V&A library has acknowledged receipt by email, "We are delighted to add it to the NAL collections, and I have now accessioned and catalogued it."
[1 Jun15] A lovely email from Marty Bax, further details to follow. My glum reaction to the lack of responses may have been premature and unreasonable given the lives other folks lead. Enthused by the replies from the V&A & Marty Bax, I plan, before long, to send two more, update v3 with copyright details and print another 10.
[22Jun15] The third print, containing copyright details, is ready go. Just waiting for a good discount offer from Lulu. [2Jul15] 25% discount on orders of 10+.
[6Jul15] Copies of the 2nd print sent to Blotkamp, Bois and Postma. Letter ready for Milner. I am thinking again about sending a couple to the Library of Congress: is it a copyright infringement only if I charge? Milner copy sent 13Jul.

Mondrian died on February 1st 1944 and so the 70th anniversary of his death was in 2014. Copyright to Mondrian's works is/was held by the Mondrian / Holtzman Trust. The linked page states

Reproduction rights and Mondrian
Seventy years after an artist’s death their images enter the public domain and no longer require copyright permission. Piet Mondrian died in February 1944 and after January 1, 2015 his images are in the public domain. In Spain the duration of the copyright is longest, being valid the term of 80 years for authors deceased prior to December 7 1987. In the US copyright protection is extended for images by foreign artists created and first reproduced and published in another country between 1923 and 1978. The extension is for 95 years from that first publication date based on the 1996 Uruguay Round Agreements Act. 35% of Piet Mondrian’s images created between 1911 and 1944 now have copyright expiration dates between 2019 and 2061 depending on the date of first publication. *

We recommend that you contact us about images you wish to reproduce which may be available in Spain in the US or on the internet so that we can check on the copyright status and clear rights if needed.

US copyright and Mondrian
The Trust, which holds the US copyrights in the images of Piet Mondrian, authorizes reproductions of images by Mondrian in publications in English which may be available in the US, and on the Internet.
Licenses are granted for reproductions of Mondrian images incorporated in commercial products such as apparel, home textiles, rugs, furniture and giftware to be distributed and sold in the US. Royalties and advances are paid to the Trust based on a licensing agreement.

To discuss a product license or copyright permission, click on the contact us button or send an Email to info@mondriantrust.com

* I copied that paragraph from the Trust's page on 20th March 2015. Looking at it again on 27th May, it now states "45% of Piet Mondrian’s images created between 1911 and 1944 now have copyright expiration dates between 2019 and 2061 depending on the date of first publication".

The Trust recently circulated Mondrian scholars with a list of the works affected.

My attention has also been drawn to some interesting material on the College Art Association website, including this document, Copyright, Permissions, and Fair Use among Visual Artists and the Academic and Museum Visual Arts Communities.

[9th May] There's a New York Times article on the subject here that justifies my decision not to publish. 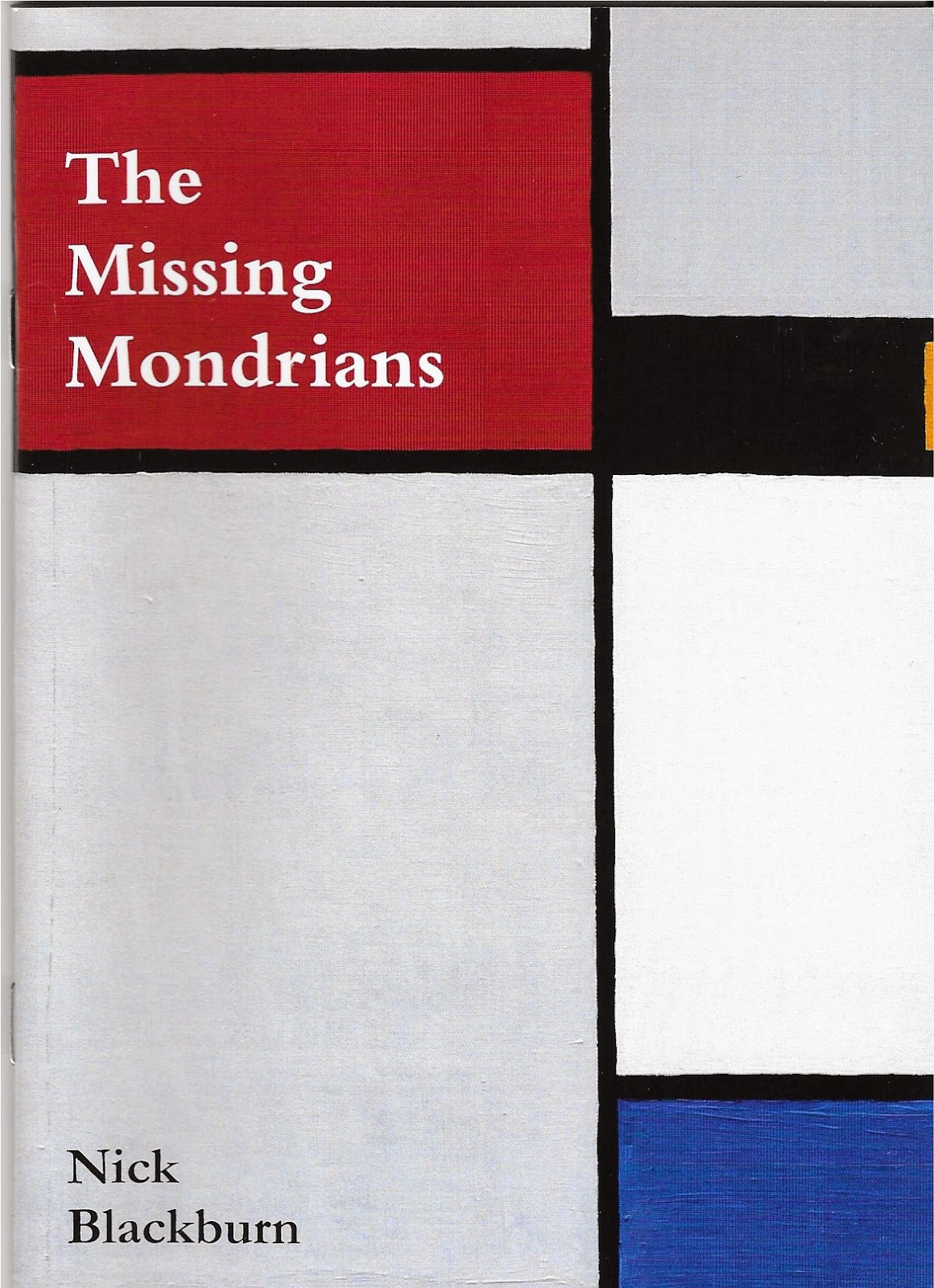 I printed 10 copies of my modest, 32-page volume from Lulu at the end of 2014 (£51.69), comfortably past the the 70th anniversary of PM's death when, I hope, copyright on his paintings ran out. The book is not generally available: I have sent out a few of the various draft editions and of the final edition and I leave one anonymously in the bookshop of every Mondrian exhibition I attend.

I sent one copy of the first edition to the British Library under the Legal Deposit scheme. The five other libraries (Wales, Scotland, Dublin, Oxford, Cambridge) can demand a free copy within 12 months of the BL deposit. No sign of that happening. [15Mar15 The BL wrote to acknowledge receipt of the book in a letter received on 14th.]
I might send a copy (actually, two) to the Library of Congress.

I sent a copy to Prof. Nancy Troy, author of The Afterlife of Piet Mondrian, and asked a few questions in my covering letter. [19Mar15] reply received with interesting information on copyright developments - I'll deal with that in a separate entry.

Of the earlier drafts, I gave one to Charles Darwent, author of Mondrian in London: How British Art Nearly Became Modern.
I left a copy in the shop at Tate Liverpool at the Mondrian and his studios exhibition.
I left another at Turner Contemporary at their Mondrian and Colour exhibition.

I should have left copies at the Courtauld show and at the Tate St. Ives Marlow Moss show and should also have given a copy to the curator and MM hero and authority Lucy Howarth, but I had not thought of handing them out  at that time. Lucy is at Tate Britain this Saturday (14th March) discussing MM, but I cannot make that one.

I intend to send a copy to Dr. Marty Bax, co-author of The Complete Mondrian and source of many other Mondrian goodies. I think we share a birthday, but I'm not sure why I think that - I'll send a copy in November anyway.

I'll probably send Mondrian hero Mark Caywood a copy if I can find his address [20Mar15] Mark has provided his Texas address and will be sent a copy next week.
And I promised Michael Sciam a copy some time ago in exchange for his but have not yet sent one.

I'll send a copy to the V&A library as their resources were very helpful in my research for the book and the web site.

It might be worth sending Jeffrey Gundlach a copy, with the suggestion that he could commission recreations.

There is a page on the development of the book on the web site. I wrote the above from memory, but having looked at the page can now add that:

In fact, as noted above, I 'published' in late 2014 and did not make it generally available. There are two main reasons for that, firstly I am still not sure about copyright and secondly, I rather enjoy restricting availability.

The distribution list has been moved to a separate post. I'll carry on here with notes on the book itself.

[17Mar15] Lulu had a one-day 34% discount offer so I have ordered another 10 copies (£35 plus £11 postage). For the second printing I have added Nancy's Troy's book to the References, together with Christopher Andreae's Winifred Nicholson. In the Introduction, I cite Troy on Mondrian's furniture and Holtzman's Wall Works. I have added a Bonus Feature to the last page, reproducing my Fourth Theory (hence the Andreae listing).

[25Mar15] Reading the 2nd printing today, I found a previously unspotted typo at the end of p.24.

[27Mar15] For the next printing I will have to clarify the copyright position. The only available space in the book was used in the 2nd printing for the  Fourth Theory and I will have to leave that in. I might be able to squeeze enough copyright detail into the introduction.

[14Apr15] I might also try to work a reference to Lawrence Block's The Burglar who painted like Mondrian for the 3rd printing (I think my description of 'rectilinear primary-coloured works' might have come from Block).

[19Apr15] I believe the copyright position is this:
Mondrian died on February 1st 1944 and so the 70th anniversary of his death was in 2014. Copyright to all Mondrian's works was held by the Mondrian / Holtzman Trust (“The Trust”), and for some it still is. The rules are varied and can be complex but those most relevant to Mondrian are:

[22Jun15] On the Block reference (see 14Apr) I reread the book but cannot find any mention of 'rectilinear'. For the latest version (1st edn., 3rd print) I have added a section on copyright and amended all the existing references to that subject. 10 copies ordered 2nd July.
Posted by NickB at 13:15 No comments: 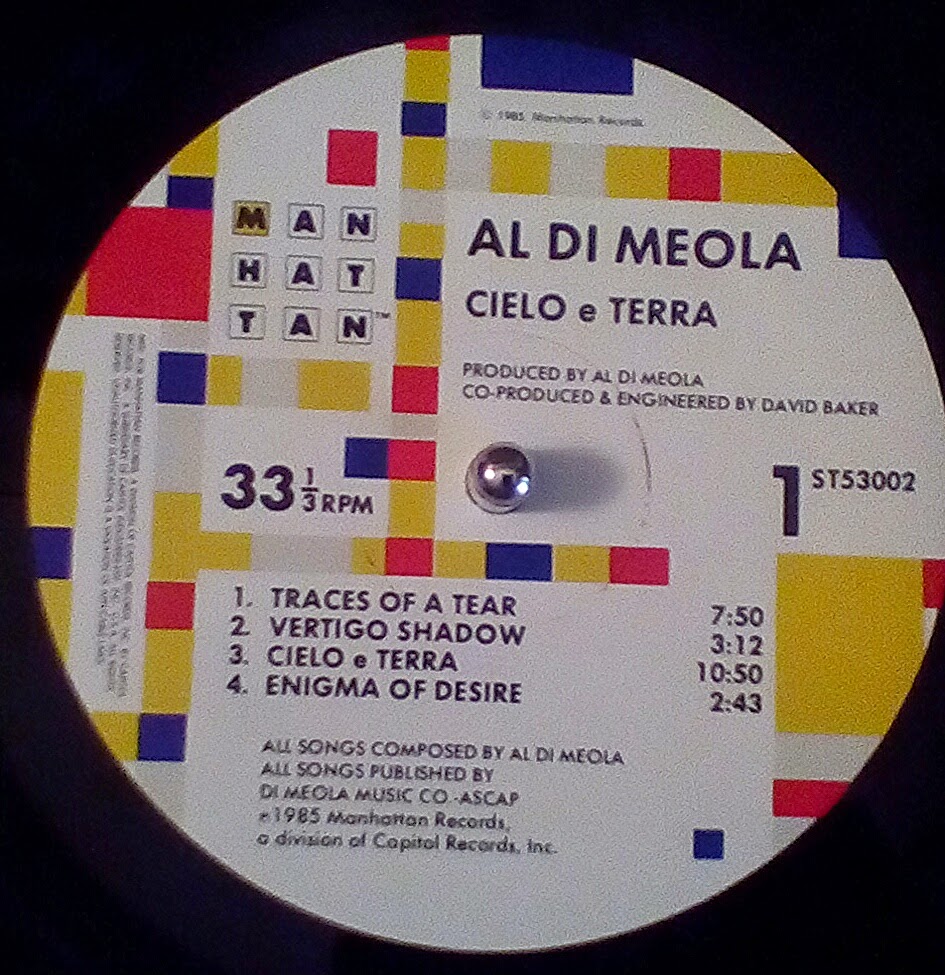 Mark Caywood is one of the heros of this site and one of the most accomplished Mondrian Homagistes. He reports that he has recently dug out his old LPs and found a Mondrian Artefact, a 1985 Al di Meola album, Cielo e Terra.

The design seems to be based on B323, Broadway Boogie Woogie.
Posted by NickB at 09:46 No comments: