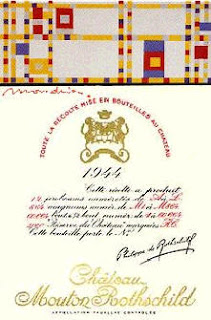 Baron Philippe de Rothschild first became involved in the family's wine production in 1922 and became proprietor upon the death of his father in 1947. The brand produces some of the finest wine available, but there's plenty of that around: more importantly, Baron Philippe developed the notion of incorporating the product with the most prestigious contemporary art by commissioning artists' labels.

Regrettably, Mondrian's death in 1944 excluded him from the process. Had he lived a few years longer, he would surely have been invited to participate and produce a label. I had to fake this one.

There's a terrific source on the real labels here, images here and a good book, Mouton Rothschild: Paintings for the Labels, 1945-81, available at sensible prices second-hand.
Posted by NickB at 14:34 No comments:

Mark is the most creative of the Mondrian homagistes with two (or three) entries on the homage pages. 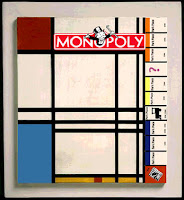 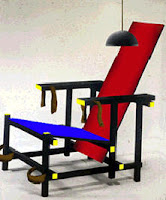 
Mark's descriptions of the pieces is as witty as the pictures themselves and he also writes perceptively and acerbically on art and particularly art institutions. Mark's work is shown here.
Posted by NickB at 02:10 1 comment: