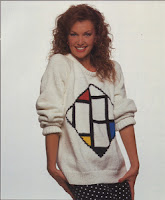 Ball and Campbell's Master Pieces is probably the most imaginative collection here. Unfortunately they missed a trick in not including Mondrian's self-made furniture.

The book contains several remarkable pieces. The one I'm showing is based on the 1836 Portrait of John and Abigail Montgomery by Joseph H. Davis. Other winners include a sideboard from Picasso's Still Life on a Sideboard and the chair from Matisse's Red Studio.